Cell culture studies provide a valuable complement to in vivo experiments, allowing for a more controlled manipulation of cellular functions and processes. For decades, cell lines have played a critical role in scientific advancements, yet researchers have become increasingly cautious when interpreting data generated from cell lines only. Factors such as misidentified and contaminated cell lines have spurred renewed interest in primary cells [1,2]. Many researchers have chosen to work with cells lines as they are generally highly proliferative, and easier to culture and transfect.  Most cell lines have been in culture for decades and are well adapted to the two-dimensional culture environment, and as a result, often differ genetically and phenotypically from their tissue origin and show altered morphology [3,4]. In contrast to cell lines, primary cells which are isolated directly from tissues, have a finite lifespan and limited expansion capacity. On the positive side, primary cells have normal cell morphology and maintain many of the important markers and functions seen in vivo [3,4]. Endothelial cell lines, for example, lack various functional markers, while primary endothelial cells retain these critical features.

Primary cells, in contrast to cell lines, are extremely sensitive cells requiring additional nutrients not included in classical media. To optimize survival and growth, primary cells perform best in specialty media customized for each cell type. An endothelial cell, for example, has very different nutritional requirements than an epithelial cell or a neuron, and thus requires a unique medium. Traditional cell culture media has relied on serum to provide the growth factors, hormones, lipids and other undefined components to support cellular growth. For primary cells, however, high serum levels can lead to differentiation or promote growth of contaminating cells like fibroblasts.  In addition, serum is plagued by rising costs and lot to lot variability. Formulating specialty media with little or no serum circumvents these issues while enabling greater customization to promote growth of individual primary cell types. Other practices, such as seeding primary cells on more physiologically relevant substrates rather than using synthetic polymers can significantly improve cell attachment, growth, and purity.

Although primary cells may be more difficult to work with, the data obtained from using primary cells is more relevant and reflective of the in vivo environment. 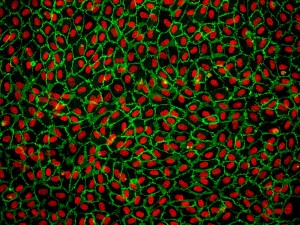